Black fungus infection again in Kerala, 38-year-old woman in Kochi undergoing treatment Kochi After a while a case of black fungus infection has been reported in K... Lava from La Palma volcano swallows swimming pool as quakes shake Spanish island Scenes of a volcanic eruption on the Spanish Canary Islands go viral The vi... Kangana targets Alia for appearing in ad, says it is 'anti-Hindu propaganda' Actress Kangana Ranaut most recently seen in the Jayalalitha biopic Thalaiv... Qatar's ruler urges world leaders not to boycott Taliban Doha The ruling emir of Qatar whose nation has played a pivotal role in Afg... Saudi re-entry visa: Expats who fail to return within visa expiry to face 3-year ban Jeddah The General Directorate of Passports in Saudi Arabia has informed th... IPL 2021: Rajasthan Royals pull off a heist against Punjab Kings Back to his happy hunting ground at the Dubai International Stadium Punjab ... Oppo A16 With MediaTek Helio G35 SoC Launched in India Oppo A16 was launched in India on Monday featuring a MediaTek Helio G35 SoC... HDFC offers home loans at 6.7% ahead of festive season Housing Development Finance Corporation HDFC has announced that it will off...

A Recent Trend that has gripped the capital district of Kerala is match screening. You heard that right, famous restaurants inns and cafes have started hosting football matches for the fans to see. Last night the entire world stood Still for 90 minutes as Madrid was host to the biggest club football match in the world - El Clasico, played between Real Madrid and Barcelona. Trivandrum had over a dozen screening centres and all of them packed to the brim. There was no shortage of dedicated fans who wanted to witness the match amongst fellow supporters. 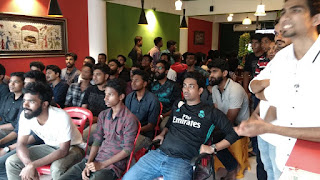 We got talking with one of the initial organisers of maths screening. Mr Sajan who is one of the admin heads of Real Madrid Club football fans in Trivandrum. He shared his thoughts before and after the match. Of course they were highly contrasting moods as one was excitement for the match to begin and the other disappointment of his favourite team losing. He also spoke of how the official Real Madrid club football had recognised his fan club, 'Pena Madridista de Kerala' as one of the official fan clubs in the state. This and views From ISL has shown india has moved from just being a nation that supports cricket.

Kangana targets Alia for appearing in ad, says it is 'anti-Hindu propaganda'