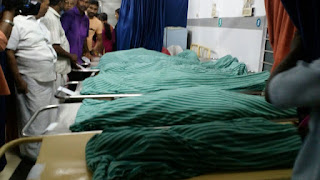 According to the reports, Six children who have died  in the accident, comes from the same family. The bodies are being kept at Arafah hospital in Changaramkulam.Two injured children and the man who ride the boat are admitted in the hospital. The accident happened when the family members who were on holiday, went to visit  the bundle crashed near the site. The locals say the accident happened when the children ride the boat. The Human Rights Commission sought the District Collector's report on the incident. The order demanded that the report be issued within three weeks.