ICICI Bank to offer instant overdraft (OD) to sellers registered on amazon.in Enables sellers on amazonin to avail OD of upto Rs 25 lakh instantly and ... Suresh Gopi's Thriller movie: From the Filmmakers of The Great Father and Mikhael Kochi With Suresh Gopi now finding time to do films in between his politica... 'The Crown' Won't Unveil Its Fifth Season of Royal Dramas Until November 2022 Netflix has announced that Queen Elizabeth will take a year off and return ... India needs at least 4, 5 banks the size of SBI: Union Finance Minister Nirmala Sitharaman NewDelhi India needs 45 SBI size banks to meet the growing needs of the eco... Jakes Bejoy to compose for Mohanlal and Shaji Kailas movie There’s a reason why composer Jakes Bejoy is one of the most soughtafter ... Expo 2020 Dubai: Meet the robots that will guide you at mega event Abu Dhabi As curtains go up in a few days in Dubai for the longawaited Expo... Taliban ban barbers from trimming beards in Afghanistan's Helmand province Kabul The new Taliban regime has banned hairdressers in Afghanistans Helman... IPL 2021: Hat-trick hero Harshal Patel helps all-round RCB thrash MI by 54 runs Dubai Glenn Maxwell justified his million dollar contract with an allround ...

Karnataka Chief Minister HD Kumaraswamy told his party workers during a celebratory ceremony in Bengaluru Seshadripuram on Saturday that he was "not happy being the chief minister."

He said, "I have swallowed poison like Lord Vishakanta. You all are happy that I became the CM, but I am not."

Kumaraswamy was speaking at the party program organised to felicitate him for waiving of farm loans.

"It is true that I wished to become the chief minister of this state before the elections and promised the people so many things. The people are now happy but I am not happy being the CM," Kumaraswamy said. 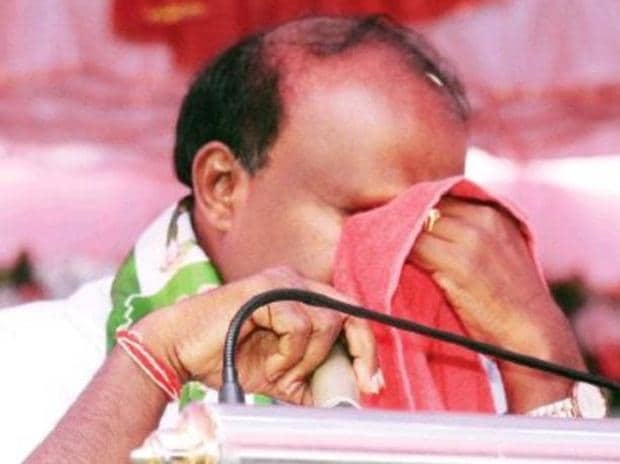 If I want, I can step down any minute. Wherever I go, people come to greet me and tell me how they are happy about the farm loan waiver. What makes me sad is that they did not vote for my party to be able to form a majority. No state had the will to waive farm loans. There was so much opposition in the government but I kept my promise, Kumaraswamy added.

Hima Das assured of government support till 2020 Olympics in Tokyo

Suresh Gopi's Thriller movie: From the Filmmakers of The Great Father and Mikhael

Jakes Bejoy to compose for Mohanlal and Shaji Kailas movie