Former Union finance minister and senior BJP leader Arun Jaitley passed away on Saturday. Jaitley, 66, was admitted to AIIMS on August 9 after he complained of palpitations and restlessness. He was placed under observation at the hospital’s Cardio-Neuro Centre.

In May this year, Jaitley was admitted to AIIMS for treatment. Earlier, citing health reasons, the BJP leader did not contest the Lok Sabha elections. After the Modi government returned to power, he wrote to the Prime Minister that he would like to stay away from “any responsibility” on account of his ill health. 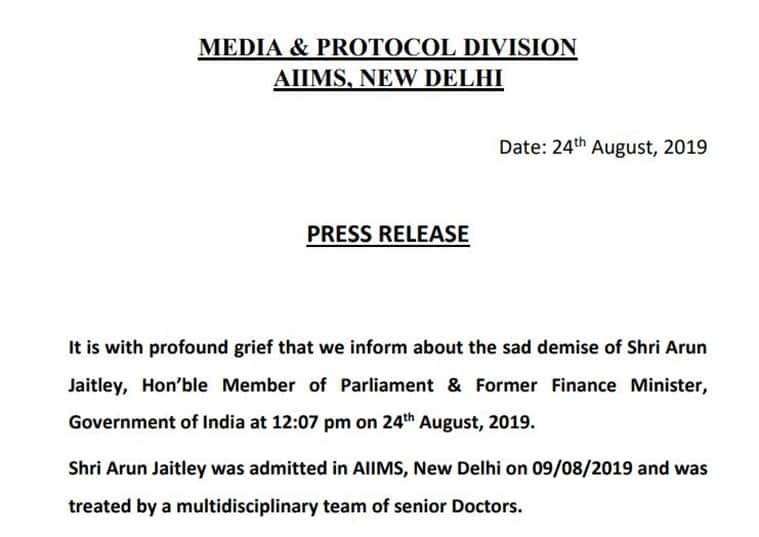 A family member who will be a guiding light: Amit Shah on Jaitley's demise.

"Deeply pained by the demise of Arun Jaitley ji. It is like a personal loss for me. I have not only lost a senior party leader but also an important family member who will forever be a guiding light for me," Amit Shah tweeted.

Mamata Banerjee offers condolences to Jaitley's family - "Extremely saddened at the passing away of Arun Jaitley Ji, after a battle bravely borne. An outstanding Parliamentarian and a brilliant lawyer, appreciated across parties. His contribution to Indian polity will be remembered. My condolences to his wife, children, friends and admirers," West Bengal Chief Minister Mamata Banerjee tweeted.

Jaitley was Born in Delhi in December 1952, Jaitley completed his schooling from St. Xaviers, Delhi and went on to pursue further education in Sri Ram College of Commerce, before completing his law degree from Delhi University.

EIA 2020 draft dangerous, urge everyone to protest against it: Rahul Gandhi

Actress Anupama Pathak passes away by suicide at her Mumbai residence