India is the mother of terrorism in South Asia and “a racist and fascist ideology is frimly embedded” in the Modi government, Pakistan has said in response to external affairs minister Sushma Swaraj’s speech at UN.

India sponsored and aided terrorism against all its neighbours, reports in the Pakistani media quoted its permanent representative to UN, Maleeha Lodhi, as saying.

Addressing the UN general assembly on Saturday, Swaraj tore into the neighbouring country, calling Pakistan a “pre-eminent exporter of terror”.

Swaraj had hit back, saying while India was giving the world top-notch doctors and engineers Pakistan was producing terrorists.

Lodhi attacked the BJP and raked up Kashmir once again. New Delhi’s “current political luminaries belong to a political organization that has the blood of thousands of Muslims of Gujarat on their hands”, Lodhi said, referring to the 2002 Gujarat riots.

India was ruled by a fascist ideology and it should stop supporting across the border terrorism, she said exercising Pakistan’s right to reply at the UN.

The leadership of the BJP government was “drawn from the RSS that is accused of assassinating Mahatma Gandhi”. The RSS is the ideology parent of the BJP.

The Pakistani envoy also criticized Yogi Adithyath’s election in Uttar Pradesh, saying “the government has appointed a fanatic as the chief minister of India’s largest state”. “It’s a government, which has allowed the lynching of Muslims.”

Lodhi also invoked Arundhati Roy to attack Swaraj’s speech and quoted the acclaimed Indian novelist’s 2015 statement. “These horrific murders are only a symptom. Life is hell for the living too. Whole populations of Dalits, Adivasis, Muslims and Christians are being forced to live in terror, unsure of when and from where the assault would come.”

Pakistan was open to resuming a comprehensive dialogue with India but it should include Kashmir, Lodhi said as she waved a picture of a woman whose face was scarred, with what looked like pellet-gun wounds. 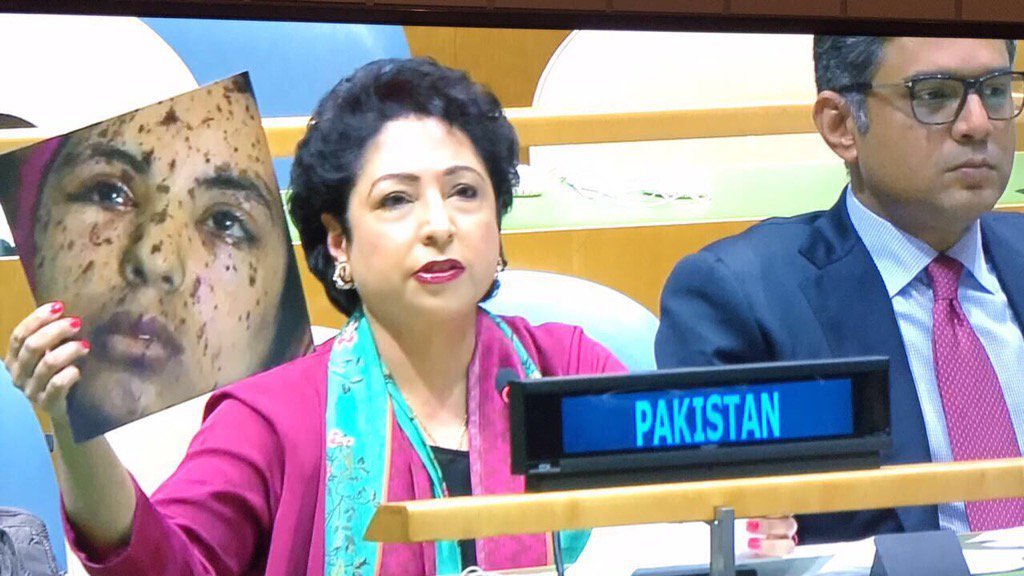 Use of pellet guns that has left several young Kashmiris completely or partially blinded is an emotive issue, with security forces under pressure to look for alternative ways to control crowds.

The UN general assembly for years has been a battle field for India and Pakistan, where Kashmir has figured prominently.

This year’s speeches have been more strident as relations between the two sides continue to deteriorate over some high-profile terror attacks in India. Pakistan’s sentencing to death an Indian sailor on charges of spying and internal turmoil in the neighboring country that is due for elections.